NXT Takeover: In Your House Results 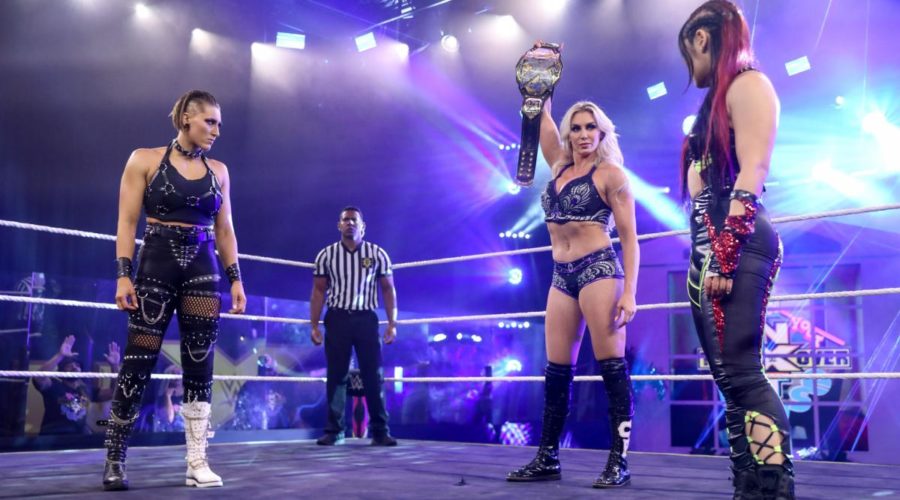 Next:
Lockdown Sessions with The Blossom Twins
Photo credit: WWE

NXT Takeover: In Your House was broadcast LIVE on the WWE Network, from the NXT Arena at Full Sail Live in Winter Park, Florida. The retro Pay per View was welcomed back to rave reviews, from the amazing set to the backstage segments, but more importantly, the matches were highly entertaining and ultra-competitive.

NXT TakeOver: In Your House Results

The match focused on establishing Raquel Gonzalez as a strong and powerful athlete, by using her size as a huge advantage to dominate the opposition. Nox was able to deliver “Shiniest Wizard” to Kai, for the pinfall victory.

Bálor attacked and surprised Priest with a scintillating dropkick to the corner. Priest was able to slow down Bálor and delivered a crucifix powerbomb, back first onto the ring apron.

In the end, Bálor connected with a double stomp to the back and then the Coup de Grace for the pinfall victory.

The suave and strong Kieth Lee had a tremendous display of athleticism in this match, which did not disappoint. Johnny Wrestling had a great match with Kieth Lee, after continuously cheating and reaggravating injuries to the Limitless One.

Despite Gargano’s rule-breaking and interference from Candice LeRae. It was Kieth Lee who stood tall and retained the NXT North American Championship, after delivering a Spirit Bomb, a powerbomb, and the Big Bang Catastrophe to the fallen and brutalised Gargano.

The “stage” was set and with such an elaborate location, only some of the very best and grand entrances from both Superstars would be acceptable, before this showdown in a Parking Lot.

In comparison, the ever so flamboyant Velveteen Dream made his entrance in a modest Yellow Lamborghini. However, given the ambiance of the location, it was great to see that Dream, paid tribute to Actor Jeffrey Dean Morgan.

Dressed as Negan from the TV Show, The Walking Dead, he swaggered to the ring with a huge grin and swinging “Lucille” in hand.

In a Parking Lot Brawl reminiscent to the fight Eddie Guerrero had with John Cena, on an episode of Smackdown in 2003. All the cars were parked with their headlights switched on, surrounding the Squared Circle. This match had No Disqualification but had to end inside the ring.

There were Chairs, Ladders, and windscreens involved, with some sly outside interference from members of The Undisputed Era, and even an incident with an Uber!

Adam Cole successfully retained the NXT Championship by delivering a Panama Sunrise to his Purple Highness – The Velveteen Dream.

A dominant performance from Kross as he systematically dismantled Ciampa.

A must-see match that needs to be watched rather than reported!

Kross gets the win via submission with the Kross Jacket, as Ciampa falls unconcious.

This match was nothing short of being spectacular as some of the finest high flying, smashmouth wrestling, closed out NXT Takeover: In Your House.

All three combatants displayed an aggressive and competitive streak, to prove that they were worthy of being NXT Women’s Champion.

In the closing moments of this Championship Match. Charlotte Flair had locked in Figure Eight, to Rhea Ripley. As Flair bridged to complete this submission hold, Io Shirai delivered an amazing moonsault to Rhea Ripley, to claim the pinfall victory and the NXT Women’s Championship.

The Genius of The Sky has now captured her first major WWE Title, as such celebrated her momentous victory, by being showered with confetti and streamers.