Previous:
WT Fan Post: How We (Nearly) Made It To WrestleMania 36 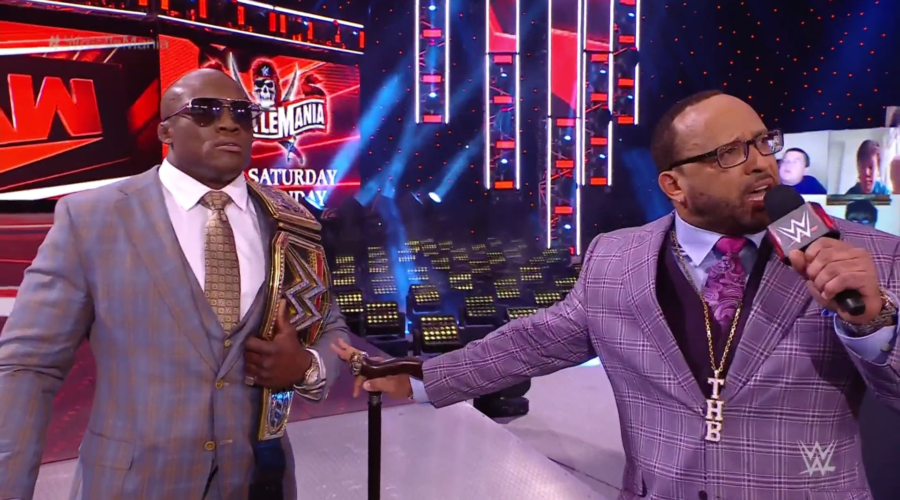 Next:
Full List of Most Outstanding Wrestler for the Wrestling Observer Newsletter Awards since 1986

Drew McIntyre engaged in a war-of-words with Bobby Lashley en route to WrestleMania
Tensions reached a fever pitch in a pre-WrestleMania back-and-forth between The All Mighty and The Scottish Warrior just five nights before their WWE Championship Match in the main event of the first night of The Showcase of the Immortals on Peacock.

Xavier Woods def. AJ Styles
Before Raw Tag Team Champions The New Day engage in a WrestleMania title showdown against AJ Styles & Omos, Xavier Woods went one-on-one with The Phenomenal One on Raw. When Styles locked in the Calf Crusher, Kofi Kingston goaded Omos into chasing him, a distraction that led Styles to release the maneuver and allowed Woods to pick up the victory with a quick pin.

Braun Strowman def. Elias & Jaxson Ryker
Prior to his WrestleMania match against Shane McMahon, a fired-up Braun Strowman stood inside the Steel Cage and explained who he was fighting for and what he planned to do to Shane-O-Mac once he got him inside the unforgiving steel on Night 1 of The Showcase of the Immortals this Saturday.

He was interrupted by his WrestleMania opponent who decided to put fuel on the fire by poking his Show of Shows opponent with some addition insults. Then, in the subsequent 2-on-1 Handicap Match, The Monster Among Men overcame Elias & Jaxson Ryker by powerslamming both Superstars and pinning the two of them at the same time.

SECURE YOUR PLACE AT NEXT YEAR’S WRESTLEMANIA, IN DALLAS, WITH OUR INCREDIBLE ‘MANIA 38 PACKAGES

WWE Women’s Tag Team Champions Nia Jax & Shayna Baszler def. Asuka and Rhea Ripley
Just days before Asuka defends her Raw Women’s Championship against Rhea Ripley at The Showcase of the Immortals, the two Superstars proved unable to work together against WWE Women’s Tag Team Champions Shayna Baszler & Nia Jax. As The Empress ascended to the top rope, The Nightmare suddenly pushed her off her perch and unleashed a fierce assault on her partner. This paved the way for Asuka to be pinned by The Queen of Spades.

Bobby Lashley def. Cedric Alexander
Prior to WWE Champion Bobby Lashley’s Raw matchup against former Hurt Business associate Cedric Alexander, The All Mighty repealed a pre-match attack from Alexander and his disgruntled tag team partner Shelton Benjamin. He then set out on a rampage that ended with Cedric tapping out to the Hurt Lock. When Benjamin attempted to break Lashley’s devastating hold after the bell, he also ended up in the excruciating maneuver.

Riddle def. Mustafa Ali
With his WrestleMania opponent Sheamus sitting with SmackDown commentary, United States Champion Riddle overcame the dangerous Mustafa Ali with the Bro Derek as he stared down The Celtic Warrior.

Drew McIntyre def. King Corbin
Fired up to battle WWE Champion Bobby Lashley on The Grandest Stage of Them All, Drew McIntyre got payback on King Corbin. After the sadistic monarch attacked him last week, The Scottish Warrior evaded a cane that Corbin borrowed from MVP and emerged victorious with the Claymore Kick to prevent Corbin from taking his place as the WWE Title challenger on The Grandest Stage of Them All against The All Mighty.