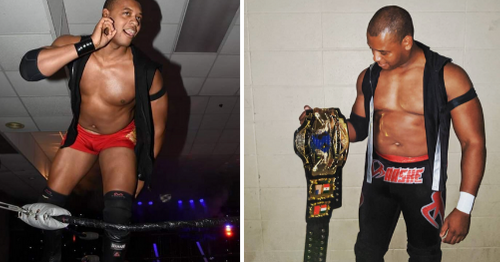 Next:
Edge Sustains Injury During Greatest Match Ever

As lockdowns persist in various forms around the world, one thing has remained consistent until now, and that is independent wrestling has been closed for business, leaving countless world class workers beleaguered and out of work.

With this in mind, we here at WT have been shining a light on as many independent talents as possible over the last couple of months, mainly via our ever expanding YouTube channel, but also on these here pages, in the hope that when these ludicrously talented workers get back to doing what they do best, a few more fans have been enlightened by their work and are prepared to spend their hard earned money watching them and maybe picking up a piece of merch or two along the way.

The latest interviewee is former Impact X Division star and member of Da Soul Touchaz, Marshe Rockett, who we caught up with a couple of weeks ago to talk quarantine, his time in TNA/Impact, inspirations, the beauty of indie wrestling and much more.

The Illinois native was in fine form, having just become a father for the second time, and left us wanting to see more of him in a post-pandemic wrestling world.

Wrestling Travel: First of all, how have you been finding quarantine and have you been doing anything in particular to keep busy?

Marshe Rockett: All in all I have found quarantine to mainly be a time to catch up on a lot of rest that I have been missing because of my jobs and all my travels with wrestling. It’s been pretty cool being able to hang around my family more especially since my wife and I are expecting our second child very soon. That being said I have spent most of my quarantine trying to remodel the house and get ready for our new baby boy’s arrival while trying to train, staying ring ready whenever I possibly can.

WT: If you could only watch one wrestler’s matches during quarantine, who would it be and why?

MR: If I could only watch one wrestlers matches during quarantine it would have to be AJ styles. He is one of the most talented wrestlers in the world today. There’s a reason why he calls himself ‘The Phenomenal One’ and he proves that every time he steps between those ropes. Whether it’s for TNA, New Japan, Ring of Honor, or even WWE. He’s proven that he could have the most phenomenal match with any superstar in any ring.

WT: You’ve worked for some of the most notable indie promotions in the United States, including CHIKARA and IWA Mid-South. Is there any indie promotion in particular that you enjoy working for the most?

MR: I get asked this question a lot and it’s always so hard to ever accurately pick one promotion that I am more fond of working for than the rest. Each promotion that I’ve ever wrestled for has provided me a unique experience that has helped me to develop into the superstar that I am today. Long story short I would have to say I love all the promotions I work for.

WT: During your time as part of Da Soul Touchaz, you’ve amassed a lot of tag team experience. If you could face off against any tag team in history, who would it be and why?

MR: I think if I could face any tag team as Da Soul Touchaz, I would want it to be against the New Day. I think a six-man tag match between all of us would be epic. What the cool concept of it being would be it would almost be fighting the polar opposites of yourself. With all they have accomplished as a group and all that we have accomplished as a group I think there would definitely be some fireworks and some magic that could come from that match.

WT: How did you find your time in TNA/Impact and if the chance ever came to go back there, would you go?

MR: My time in TNA/Impact was super cool and definitely an eye-opener as far as what it meant to work for a nationally televised promotion. I got to work with some incredibly talented and gifted individuals who I’m also proud to now call friends today.

When I first arrived everybody was so friendly and welcoming that even though I was the new guy in town, they treated me like I was family and had been there for years. The matches and the opportunities that I was able to receive there I will always hold dearly in my heart. If ever given the chance to go back, I would take in a heartbeat. The only thing I would do differently would be taking on more of the heavyweights as opposed to focusing more on solely on just the x division.

WT: Who’s your greatest ever opponent?

MR: That’s a bit of a tough one to call because I’ve been in the ring with a lot of great and talented superstars. All of whom have one time or another pushed me to my limits and help make me a better performer. But at the end of the day, I would say the greatest opponent that I have ever had to face would be myself. No matter if it’s a good or bad performance I’m always critical of myself because I want to be the best of the best.

WT: What do you love most about independent wrestling?

WT: What’s the best advice you ever received in pro wrestling?

MR: I have been blessed and fortunate enough to have picked the brains of some of the greatest minds in the world of professional wrestling. Each and every time, I was given great advice and lifelong wisdom that would transcend even past the ring. The one piece of advice that sticks out better than most is “Always be you”. Three simple words that have a very impactful meaning behind them. Basically, if you want to be successful and happy the best way to do that is to be who you are and not change because society or the business asked you to.

WT: When pro wrestling returns to normal and you can step back inside the squared circle, what’s next for Marshe Rockett?

MR: There’s still a great deal I want to accomplish on the independent scene and a lot of places that I still want to travel. More importantly though I want to eventually sign with a major promotion and continue to travel and wrestle internationally.

WT: Finally, as we’re Wrestling Travel, we want to know what your best story is from your time travelling on the road as a pro wrestler…

MR: Oh man this one is really too tough to call. And all my travels have made a lot of great memories. Unfortunately, some of those memories may not exactly be appropriate for your readers…

And, Marshe, from the entire WT Family, we’d like to extend our congratulations to you and your wife on the birth of your amazing son Xander.