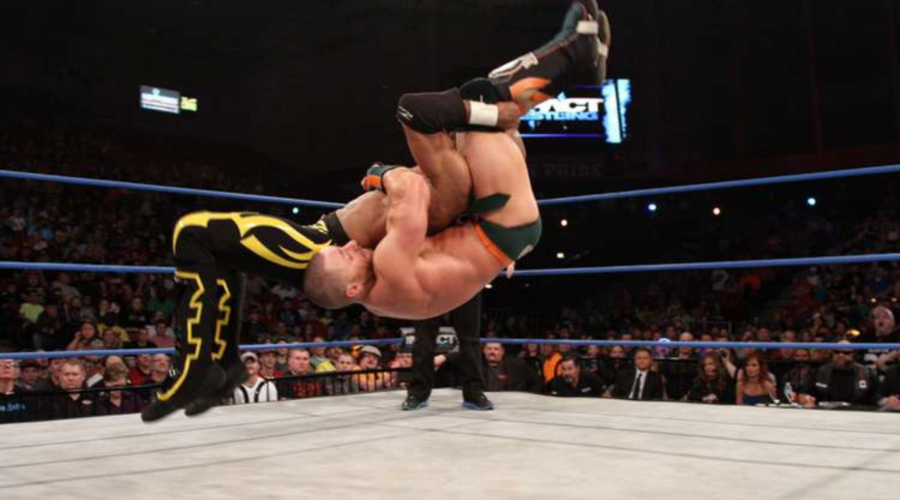 Petey Williams’ Canadian Destroyer was once the most jaw dropping move in pro wrestling. We’d never seen anything like it. A SOMERSAULT PILEDRIVER!? It was video game fantasy, not something that you’d ever truly expect to see executed inside the squared circle. But now, what was once an awe inspiring, logic defying feat of athleticism and innovation is one of the most commonly, popular used high spots in the game.

But how did it come to be?

Luckily for us, it’s originator sat down with WT’s very own Justin Clapper this past week for an upcoming episode of The LockDown Sessions on Youtube and explained the origins of the Destroyer.

Given that we’re suckers for old school X Division goodness, we’ve been deep diving into the incredible Impact Plus App to relive some of Petey’s greatest hits, which saw the Destroyer deliver him two X Division Titles and earn him the TNA ‘Finisher Of The Year’ between 2004 and 2006 as well as Wrestling Observer’s ‘Manoeuvre Of The Year’ in 2004 and 2005. And after reminiscing over endless mid noughties X Division bangers, we heard from the man himself about how he flipped a classic wrestling move on it’s head and changed the game.

“We were driving, it was me, Sabin and Truth Martini. This is 2003 before I’d even started with Impact, so we’re driving to an IWA Mid-South show to work for Ian Rotten. We’re talking about moves and all that kinda stuff when somebody mentioned a flipping piledriver and I’m like ‘what!?’ and again, this is 2003 so it’s not like we can pull Youtube up on our phones and be like ‘yeah, check it out’. So you’re using your imagination and I say to Sabin ‘I don’t know what a flipping piledriver should look like’ and he’s like ‘should I give it to you or should you give it to me?’

“So we were gonna do it in the match but then decided not to. But then the next month we go down, same show, and I’m wrestling Matt Sydal and I go ‘hey I got this new move I wanna try. It’s an, erm….flipping piledriver’ and that’s not something you say in 2003. It sounds insane, but Sydal goes ‘OK, cool’ and I have no idea how to do it, he has no idea how to take it. But it came off so well that I was like ‘well I guess I’ll keep doing this then’.

“But years later people started coming up to me and started saying ‘hey, you know that’s Amazing Red’s move, right?’ and unbeknownst to me Red has video tape of him doing the move when he’s like 12 years old along with every other wrestling move he ever invented.

“So I had to give it to him in 2004 on a TNA show and thought I was gonna have to explain it but he just said ‘ah yeah I’ve taken that move before, I came up with that’ and I thought he was messing with me but yeah, it turns out there is now video of him online in the ’90s when he’s probably younger than 12 years old, like eight or nine, doing all these moves. The Destroyer looks a little bit different, he does it running but it’s on there with all the other moves he invented.”

OF COURSE Amazing Red was doing running Canadian Destroyers when he was nine. But, while Williams may have been pipped to the post in terms of strictly originating the move, he is responsible for popularising it in the mainstream and gifting the modern generation their most popular spot.

Williams’ full interview with JC on our official Youtube channel will go live tomorrow afternoon. We cannot recommend it enough, so if you could watch it, enjoy it and then hit us with a thumbs up and a subscribe, we would be forever grateful.

And finally, don’t sleep on the Impact Plus app, which delivers thousands of hours of incredible four and six sided pro wrestling straight to your device of choice. There is a free trial available and unlimited access on a monthly subscription will only set you back $7.99, which is roughly £5.64 in the UK. Can you afford NOT to subscribe to it?